For the first time one of his novels has been translated into another language.
On November 10th, his latest novel appears “Vergelte!” entitled “Reap The Storm” and will then be available throughout the English-speaking world as a pocket book, e-book and audio book.
“Reap The Storm” also gets its own cover and here you can see it already in advance.
So he likes it very well!
And he's very anxious to see if the translation just as well received as the original. 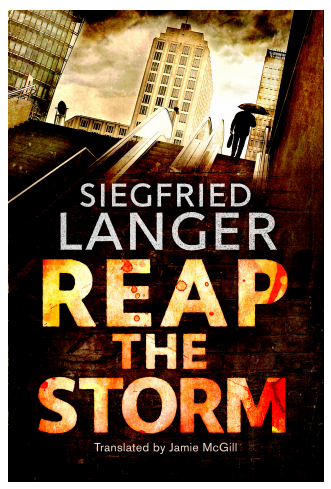 The first crime scene was the most disturbing. From the looks of it, the killer had dipped their fingers in the victim’s blood and used it to write in dark red on the white wallpaper. Although the letters were smeared and uneven, Detective Niklas Steg had no trouble making out the message: “Reap the storm.” Now, with the help of Private Detective Sabrina Lampe, Steg must hunt down a terrifying serial killer dead set on delivering a particularly gruesome form of justice on men with a history of violence against women. Before each slaughter, the murderer sends a note to the intended victim that simply says, “Sow the wind…” When an innocent man receives the warning, Steg and Lampe race to crack the case before he, too, meets a brutal end.

Here you can order “Reap the storm” at Amazon

Thanks a lot dear Siegfried Langer, that I may publish the cover image with your approval here and on other platforms in conjunction with the book